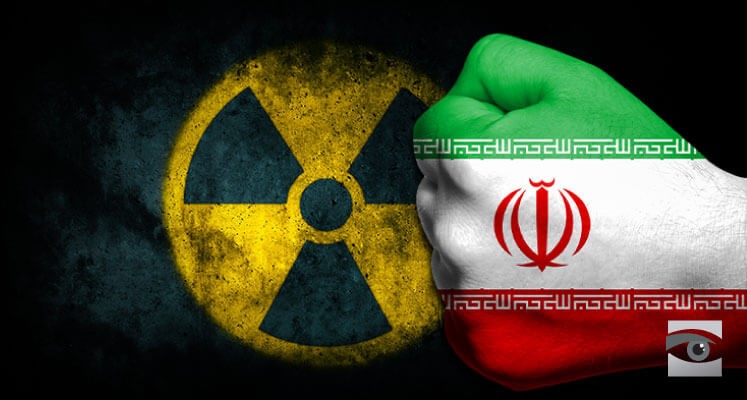 QUESTION: Why does Israel Oppose the U.S. reentering the nuclear agreement with Iran?

President Biden has announced (February 2021) his intent to return to the Nuclear Agreement with Iran provided Iran comes into strict compliance with the terms of the agreement. His position is that once the agreement is back in place, the United States will be in a better position to negotiate further agreements to lengthen and strengthen the nuclear prohibitions and to curb Iran’s aggressive behavior in the region, both through its proxies and directly.

Israel has made it clear it opposes going back to the original nuclear agreement with Iran. Prime Minister Netanyahu has indicated Israel would support entry into a new agreement with Iran that would be more realistic in stopping Iran from developing nuclear weapons and would prohibit Iran from its aggressive behavior and support of terrorism. Israel has urged President Biden to consult not only with Israel, but with Arab allies in the Region before entering any agreement with Iran.

What is the nuclear agreement with Iran? 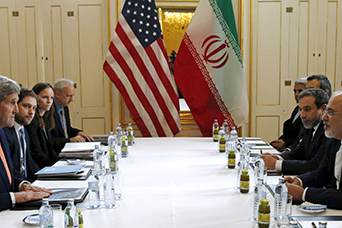 The key provisions in the agreement include the following:

What Did the JCPOA Fail To Do?

In an article in The Atlantic written in January 2021, Michael Oren and Jossi Harlevi argue: “The JCPOA didn’t diminish the Iranian nuclear threat; it magnified it.” They point to a number of issues in the agreement that would permit Iran to accomplish the three necessary steps to becoming a nuclear military power – highly enriched uranium; a functional warhead; and a missile capable of delivery. They point out the agreement allowed Iran to move forward working to develop its nuclear capability. While it limited Iran’s immediate ability to enrich sufficient uranium for a nuclear bomb, rather than dismantling Iran’s nuclear infrastructure, the agreement permitted Iran to retain that infrastructure. Iran’s nuclear infrastructure was “unnecessary for a civilian energy program, but essential for a military nuclear program.”

They specifically pointed out the following problems with the negotiations and agreement: 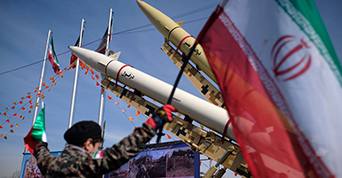 Thus, the JCPOA left all three of the necessary components in place that Iran needs to become a nuclear military power.

Oren and Harlevi also point to the economic sanctions relief provided in the JCPOA which immediately poured tens of billions of dollars into Iran. The money was not used for infrastructure development, badly need in Iran, but has been used to support Iran’s efforts “for regional hegemony.” It has been used to expand Iran’s international terror network, fund terrorist groups and expand Iran’s influence in Syria, Lebanon, Yemen and Gaza.

Oren and Harlevi conclude that “Reviving the JCPOA will [ensure] the emergence of a nuclear Iran or a desperate war to stop it.” Not only have flaws with the JCPOA been observed in hindsight, but issues were identified even before the agreement was signed. House Speaker John Boehner invited Israel’s Prime Minister, Benjamin Netanyahu, to address a joint session of Congress in March 2015 without consulting President Obama.

The White House question whether protocol had been violated. Netanyahu raised many concerns about Iran, including:

Netanyahu warned that the deal being negotiated “doesn’t block Iran’s path to the bomb, it paves Iran’s path to the bomb.” The deal being negotiated left Iran’s vast nuclear infrastructure in place, leaving its nuclear facilities intact and its centrifuges either operating or being temporarily unplugged, but available. With an automatic expiration of the restrictions, he warned Iran would be able to quickly ramp up its production of nuclear weapons. He further warned that the failure to include Iran’s missile program in the deal would permit Iran to further develop its capabilities of creating delivery systems enabling it to threaten anywhere in the world with a nuclear attack, including the United States. Netanyahu believed entering into the agreement would further risk nuclear proliferation by other countries in the Middle East. 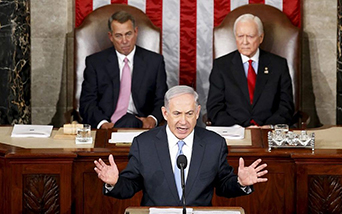 Netanyahu recommended that should a deal be entered into with Iran that eliminated the restrictions on enrichment of uranium, those restrictions should only be lifted if Iran meets three prerequisites:

Once the JCPOA was announced, others joined in the opposition to it. For example, the Anti-Defamation League opposed the agreement for multiple reasons:

Other organizations, including the American Jewish Committee also opposed the agreement as proposed and then entered. In an article titled Iran—A Threat to Regional and Global Peace and Security, the AJC reiterated the reasons it opposed the JCPOA:

Both during his campaign and immediately after his election, President Biden committed to reentering the Joint Comprehensive Plan of Action as promptly as possible. Vision for America's Future.

In a Foreign Policy Address in New York in 2019, Biden stated: If Tehran returns to compliance with the deal, I would re-join the agreement and work with our allies to strengthen and extend it, while more effectively pushing back against Iran's other destabilizing activities.

President Biden has strong support to reenter the JCPOA from Democratic Congress Members.

There are other indications of President Biden’s support for re-entering the JCPOA. 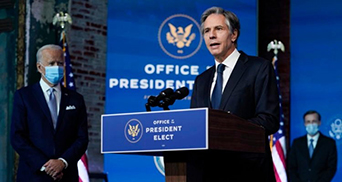 Since taking office, President Biden’s stance with respect to simply re-entering the JCPOA and then dealing with some of the problems in the original JCPOA has softened slightly.

In response to the U.S. offer to restore the JCPOA, Iran’s Foreign Minister, Javad Zarif, stated Iran will only reverse its course of action, which included enrichment of uranium, after the U.S. lifts its sanctions. 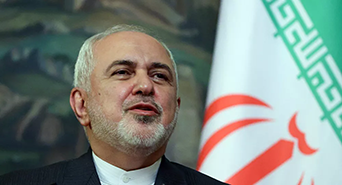 After Iran acted to curb UN nuclear inspections in late February 2021, the U.S., with support from Britain, France and Germany, pressed for a U.N. resolution criticizing Iran for eliminating its cooperation with the IAEA.

Israel’s Response to the U.S. Announcement of
the Willingness to Reenter the Iran Agreement

The Reaction of Others to the Possible Reentry into the JCPOA by the U.S. 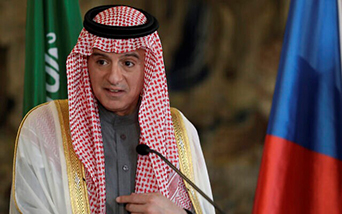 In urging the United States not to move too quickly and to include its Middle East partners, Saudi Arabia’s Abdel al-Jubeir during a news conference said: “We believe that Iranians have only responded to pressure.” 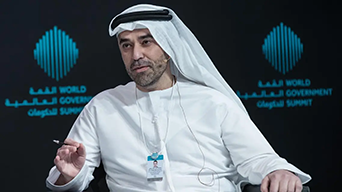 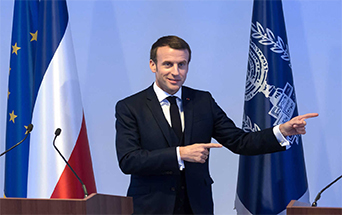 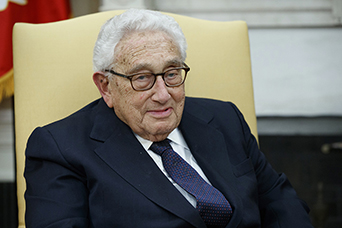 Was the JCPOA Working?

As might be expected there are differing schools of thought on whether the JCPOA was working prior to Trump’s withdrawal from the agreement. Supporters of the JCPOA argue that the agreement was working as evidenced by the reports from the IAEA. They believe the breakout time for development of nuclear weapons has been lengthened by the agreement and that Iran remained in compliance until Trump withdrew from the JCPOA. Supporters of the JCPOA do not address Iran’s support of terrorist activities nor its support for the Syrian regime, nor do they address other efforts by Iran, outside of the terms of the JCPOA, to engage in the activities necessary to develop a nuclear weapon -- research and development, the development of fissile material, weapons systems and the means of delivery. Supporters do not address the cache of material secured by Israeli intelligence evidencing Iran’s lies over time and leading up to the entry into the JCPOA. Supporters argue that by withdrawing from the agreement, the Trump administration opened the door for Iran’s current increased activity in working toward achievement of its goal of having nuclear weapons. They believe only reentry into the JCPOA can prevent that result.

Opponents of the JCPOA point to the weaknesses in the agreement and claim there have been violations of the agreement, if not in fact, certainly in spirit. Opponents point to the shortcomings in the agreement in its failure to address Iran’s desire for hegemony in the Middle East. Opponents argue other Middle Eastern countries have taken steps to acquire nuclear capability leading to nuclear proliferation and further potential destabilization of the region rather than a more desired peace or at least coexistence.

What are some of the facts reported? 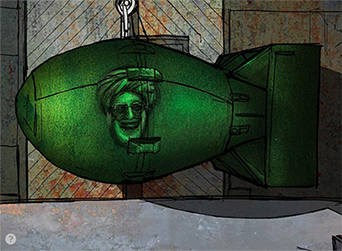 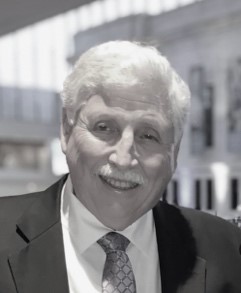 *Any opinions expressed in this article are those of the author and not necessarily those of the Jewish Federation of Sarasota-Manatee or of the Community Relations Committee.

1The P5+1 refers to the five permanent members of the UN Security Council, China, France, Russia, UK and US, with Germany as the +1. European countries frequently refer to this group as the E3+3.